Mazu, Goddess of the Sea and protector of fishermen and seafarers is not your average folk legend. Arguably the most worshipped deity with 1500 temples and over 100 million devotees, Mazu’s legend is almost as varied as the 26 countries she is reported to be worshipped in. Taiwan’s widespread belief however, entails of a young girl from a fishing village who possessed other-worldly powers to help fishermen stay safe when out at sea. The most well-known account was when her father and brother were caught in a storm and went overboard. Mazu was at home when she went into a trance and transported herself to go save them. She was able to rescue her brother but her mother obviously worried at her state, woke her from her trance and her father unfortunately drowned. Due to her personal loss, her soul remained at sea, continuing to roam the seas to save as many people in trouble as she could.

Don’t downplay the hearsay. Such stories of heroism led to her deification in both Buddhist and Taoist traditions. Then, sometime in the Qing dynasty, after being conferred a number of official titles by emperors themselves, local Taiwanese grew to venerate Mazu not only as the Goddess of the Sea, but as the patron guardian for the island as a whole; making her the most alluring heavyweight of cultural and religious significance for Taiwan.

People really go manic for Mazu here, and few holy pilgrimages across the globe can measure up to that of Mazu’s in volume, distance, and sheer noise. Over 9 days, some 5 million people participate in the annual event which is a giant early birthday bonanza for Mazu (her birthday is on the twenty third day of the third lunar month which usually falls in late April or early May). Sitting in a tiny palanquin, the statue of Mazu will be carried on-foot from Jenn Lann Temple, her home temple in the small township of Dajia (大甲鎮瀾宮), followed by a giant swarm of devotees walking continuously for 8 days and 7 nights through the counties of Taichung, Changhua, Yunlin and Chiayi before returning to Dajia. Celebrations though is not limited to traditional rituals. A part from having some of the most impressive fire power to be witnessed, Mazu mania involves light shows, parades, talent competitions, night markets and more. Not too shabby of a birthday celebration for someone believed to be born in 960 AD.

Wanting to see just how big a party Taiwan can throw for Mazu, I went to catch up on the action from day 8 of the Pilgrimage as she was heading back through Qingshui township towards her home temple.

“Miss, if you’re tired, you can head downstairs to rest. There are many others who are staying, waiting for Mazu.”

A volunteer of the temple directs me to a place to rest my tired legs. Obviously experienced with overnighters before, the Temple had a pile of flattened cardboard boxes to be used as mattresses. Thankful just to not be sleeping outside on concrete, I grabbed a few and set myself up in a small alcove amongst piles of incense paper, ready to be burnt in prayer rituals for Mazu. 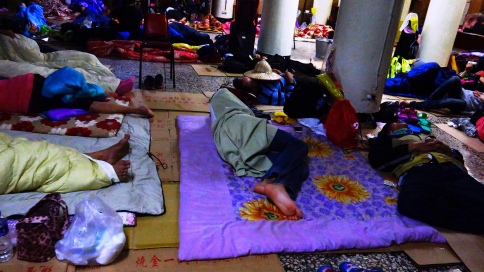